Joined 11 mo ago
·
3 Posts
My old 60 gallon 6hp twin threw a rod big end bearing a couple of weeks ago.
My cousin gave me a Dayton Speedaire 5hp 1WD55 two stage 80 gallon.
It has a Baldor 3 phase 5hp motor that I will replace with a single stage.
The pump was replaced before he bought it and has very little time on it only being run only to test the new pump.
He ended up buying a $10,000 Kaeser AIr Tower and never even wired it up so it sat in his shop for the last four years.
Before I go for a new motor I want to get some information on the pump.
I contacted Grainger but when they found out that I hadn't bought it from them they weren't interested in me.
I described the pump and he was "confident" (arrogant) that it was not the original type.
I downloaded the owner's / parts manual for their pump (1WD21) and it looks (to me) identical.
The cast in part numbers on the crankcase, cylinder, and head have the same numbers as the Grainger parts.
I've searched the web and everything I see leads me to believe that it is the same (1WD21) pump that Grainger sells and that came on the compressor.
I've attached several pictures and hopefully some of you knowledgeable folks can give me you thoughts.
Thanks
H K 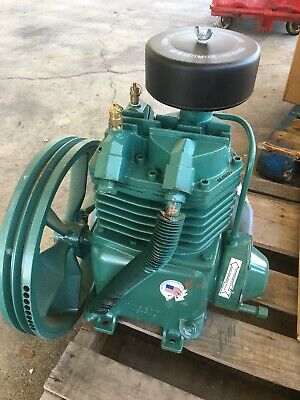 Joined 11 mo ago
·
3 Posts
Thanks for the link.
There's little doubt in my mind that this is a 1WD21 pump.
I found a large air compressor distributor not to far from me in Tennessee and he has the cheapest price on a Baldor motor that I have found anywhere.
Looks like a Camero road trip is coming up.
Cheers
H K

I bought a "light duty" 5 HP WEG WEG Air Compressor Motor 5 HP Frame 56hz 13521268 for sale online | eBay for $160 open box. Thinking it is too weak for your application, I am drawing 4.2HP work load from it and it gets really hot. WEG is a good brand Quincy uses them for some of their compressors these days.

Joined 11 mo ago
·
3 Posts
Stephen,
Thanks for the info on the WEG motors.
I had done some research on them.
There's an air compressor distributor not too awfully far from me and he handles Baldor motors (that come on the units he carries).
He offered me a very good price on a Baldor L1430T.
I had somewhat settled on a Baldor EL1410T until he priced the L1430T to me.
I may get him to quote me an EL1410T.
Thanks again to all who offered input.
H K

Sounds like you have a good plan of action. Obviously an American brand would be the longest lasting choice!